Amazon.in
Rs. 6,999
See it
Last Amazon price update was: November 19, 2018 11:18 am
× Product prices and availability are accurate as of the date/time indicated and are subject to change. Any price and availability information displayed on Amazon.com (Amazon.in, Amazon.co.uk, Amazon.de, etc) at the time of purchase will apply to the purchase of this product.
Verdict
Buy Kult Gladiator Mobile Phone is a suitable option for those who are looking for a feature-loaded performance-oriented smartphone at a nominal budget. The large display is definitely an added advantage for the users to indulge in gaming and video streaming without much strain on the eyes. In every department, be it performance, camera or battery backup, the device does not let you down anytime.
Powerful Smartphone with crisp display
Display, Configuration  and  OS
The Kult Gladiator flaunts a 5.5-inch (13.97 cm) IPS LCD HD display with a screen resolution of 720 x 1280 pixels. The pixel density of the display is 267 ppi which indicate a sharp and crisp display. It has a metallic body and features 2.5D curved glass display.
The device boots on Android v7.0 (Nougat) operating system.
Camera and storage
There is a 13MP primary camera featuring with autofocus, LED flash, digital zoom, face detection and touch to focus.
Battery and connectivity
Connectivity options include dual-SIM, VoLTE, 4G (supports Indian bands), Wi-Fi 802.11, b/g/n, Mobile Hotspot, Bluetooth, GPS with A-GPS, and micro USB 2.0 slot. The smartphone has a fingerprint sensor at the rear panel adding more security to the device. Other available sensors are light sensor, proximity sensor and accelerometer. 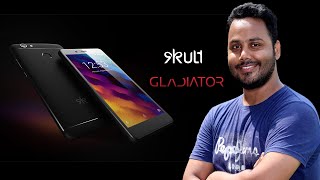