Amazon.in
Rs. 29,990
See it
Last Amazon price update was: July 17, 2018 11:37 am
× Product prices and availability are accurate as of the date/time indicated and are subject to change. Any price and availability information displayed on Amazon.com (Amazon.in, Amazon.co.uk, Amazon.de, etc) at the time of purchase will apply to the purchase of this product.

How does it look?

Indeed, the design of this latest console has had a complete overhaul from the original PS4, and out of the box the first thing that struck us was its new matte-black color. Not only does it mean that it doesn’t get soaked in mucky fingerprints, but it’s more resistant to attracting dust. The light bar that runs across the top of the PS4 (which lit up blue when it was on, and orange while in Rest Mode) has also been removed. Though it’s kinda cool to see your PS4 glow, this also means there’s no groove that gather dusts on top of the Slim, so what you’ve got is a much cleaner-looking console.

That fresh feel also applies to other areas of the PS4 Slim’s design. The sharp corners of the original console give way to more rounded edges which gives the PS4 Slim a more compact, polished and curvier look, while underneath the console are four small legs that grip the PS4 Slim to your surface to add some extra stability.

What’s up with those symbols on PS4 Slim’s underside?

Electronics often have little rubber feet on their undersides to keep them from sliding around on your shelf. Does the PS4 Slim have a stand? 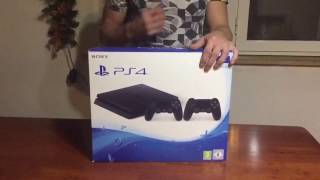